The subject was the new book by Stefan Denaerde (his second), pseudonym of Ad Beers, that’s how I learned thirteen years later via the internet. It is also thanks to the internet that I managed to buy both books in 2003: Operation Survival Earth from 1969 and Universal Creation from 1990.

A.C.M. Beers was a successful car importer who appears in the Quote top 100 of richest Dutch people of 1990. (Quote is a Dutch Magazine for the rich and wealthy). Estimated capital: 185 million guilders. He died unexpectedly in 1998.

Is there still very little about Denaerde on the internet in 2003, the references are numerous nine years later, March 2012. Googling to his name produces many hits and even a youtube movie with an interview of over forty years ago. Denaerde claims by then to be 46. That would mean that he turned 75 or 76 in 1998.

Also very special: on 15 November 2011 a reprint of his first book Buitenaarde Beschaving (Operation Survival Earth) suddenly appears, again at the publisher Ankh-Hermes in Deventer (which originated from Kluwer, who took care of the first edition). This book caused a lot of dust at the time. But whether you dismiss it as sheer nonsense, or whether you become fascinated by the possibilities described, it is certain that this 1969 book contains things that have become true more quickly than was thought possible at the time. For example, an obvious description is given of an e-reader. ( see 7th edition, page 97.) We can hardly imagine now such a thing being unimaginable. The extraterrestrials with whom Denaerde came into contact (Iargans) had tablets on which information was stored. Denaerde writes this at a time when the internet was not even in the children’s teens and wireless communication was, one-way, limited to radio and television. A flat square screen on which you could conjure up information was literally science fiction.

Almost all readers of Operation Survival Earth are positive about the book, whether or not they believe Denaerdes’ story. One fellow-student whom I recommended to read it, however, found the depicted world to be very clinical and chilly. It’s the only criticism I’ve ever heard. If one turns ‘efficient’ into ‘sustainable’ everywhere in the book where the word occurs, then it already sounds very different, even contemporary. Of course ‘sustainable’ existed as a concept in 1969, but certainly not yet in the meaning we give it now.

Buitenaardse Beschaving has also been translated as Operation Survival Earth: 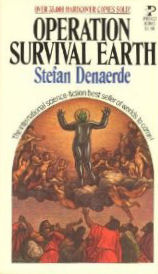 To the fast-growing information about Denaerde I can add something myself: the (small hour) radio interview with Denaerde from 1990 (52 Mb). I received the tape from the KRO in 1991. Recently I converted it to Mp3-format.

I have always kept a low profile when it comes to whether I believe in the story of Denaerde, even for myself. I have no doubt about his sincerity. And at least the story is hopeful, you’ll be happy with his message. It also connects to what I do believe: a Creating, Loving God, God of Abraham, Isaac, and Jacob. It only tells so much more, much more than we humans need to know. To the core of Denaerdes message you come, in my opinion, also through the Bible. Augustine’s word, which says: “do not understand to get faith, get faith to understand”, may apply.

Aren’t I going to cross a line on this? No, I hope not. Investigate all things and keep the good. Do I open a door to a world we’d better avoid? I don’t believe either, Denaerde indicates that in 1990 there were only five people in the whole world with the gift he possesses.

Denaerde himself does not exclude the possibility that he has been misled by the super-intelligent race that always sought contact with him (but does not take that option seriously for a moment). He seems to have died lonely, declared crazy by many. Years after that his story may rejoice in increasing interest, unfortunately, he was not allowed to experience that anymore.

Powerpoint from Norway This contains references to radio frequencies picked up by Dutch defense systems, which match Denaerdes claims